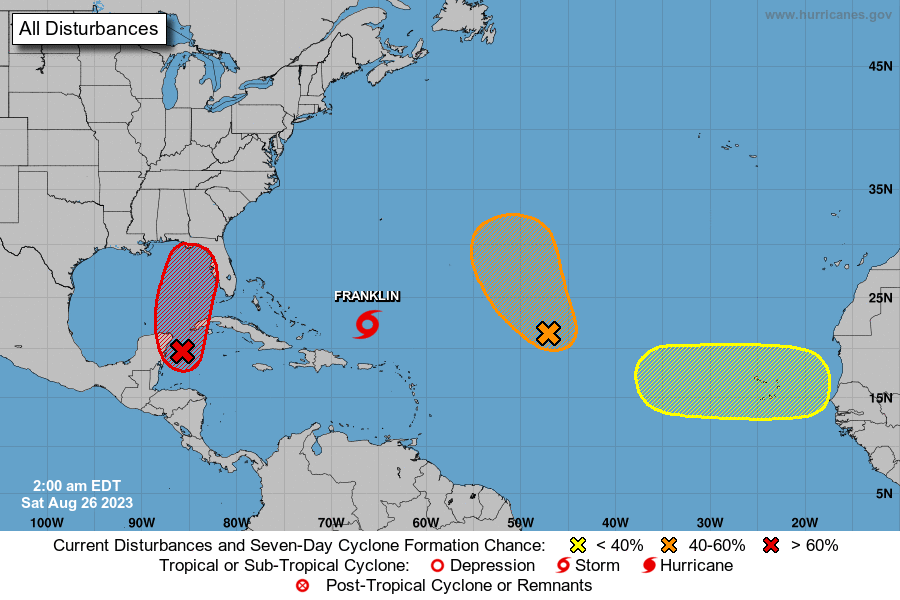 For the North Atlantic...Caribbean Sea and the Gulf of Mexico:

Tropical cyclone formation is not expected during the next 5 days. 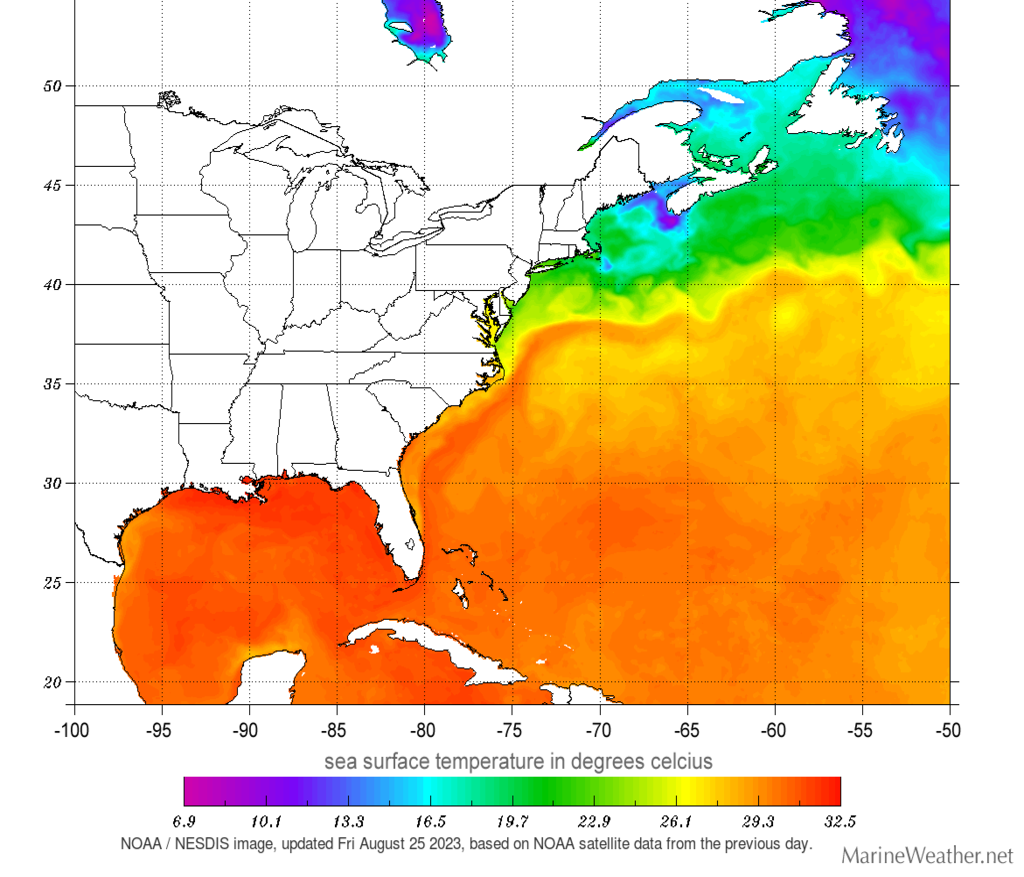 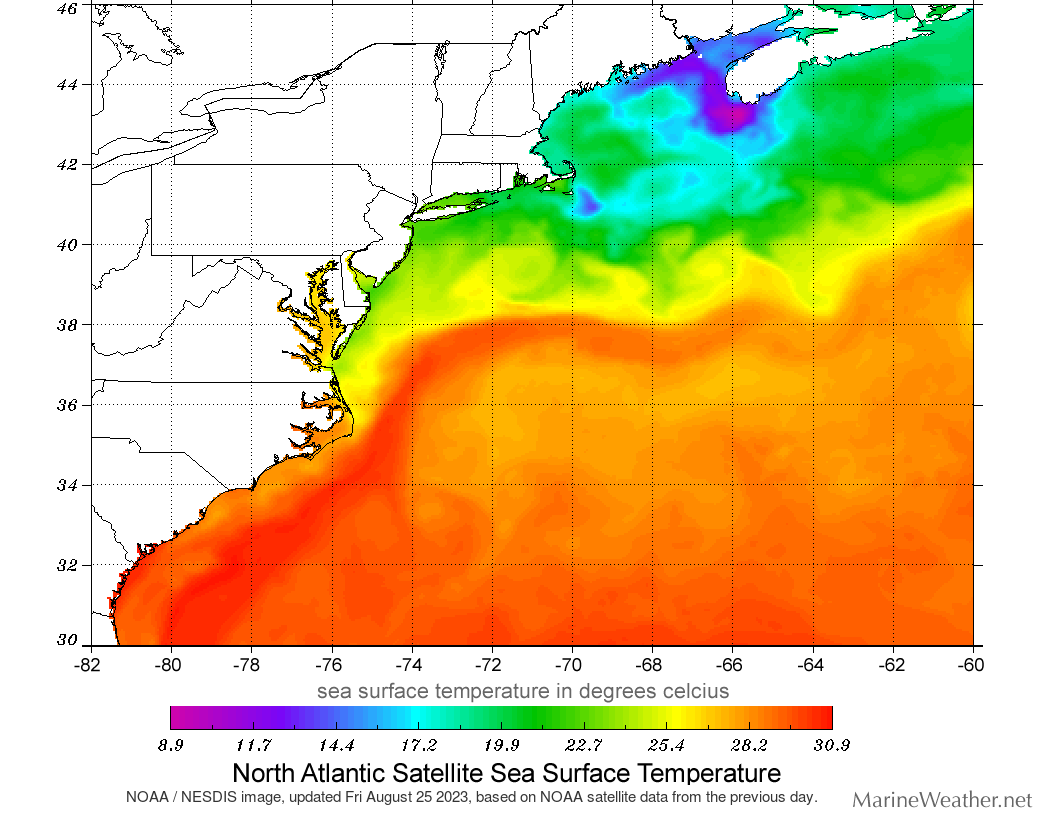 Tropical Weather Discussion for North America, Central America Gulf of Mexico, Caribbean Sea, northern sections of South America, and Atlantic Ocean to the African coast from the Equator to 31N. The following information is based on satellite imagery, weather observations, radar and meteorological analysis.

Based on 1200 UTC surface analysis and satellite imagery through 1715 UTC.

Active and Developing Storms
Gulf of Mexico Gale Warning: A cold front will enter the NW Gulf early on Wed, followed by strong to near gale force N-NE winds. Frequent gusts to gale force are expected in the NW Gulf on Wednesday and early Wednesday night. As a result, seas will build to 8-10 ft in the NW Gulf, and continue into Thu. Scattered showers and thunderstorms are expected along and ahead of the front. Winds and seas will diminish late Thu. For details on this Gale Warning, Please read the latest High Seas Forecast for more info..

Monsoon Trough And Intertropical Convergence Zone - ITCZ
(The ITCZ is also known by sailors as the doldrums)
The monsoon trough axis extends from the coast of Guinea near 10N14W to 08N18W, where recent scatterometer data indicates that it transitions to the ITCZ and continues to 04N36W to the mouth of the Amazon River near 01N50W. Scattered moderate convection is within 120 nm north of the ITCZ between 30W-40W.

For the forecast, weak high pressure over the area will shift eastward through late tonight as a strong cold front approaches eastern Texas. The front will enter the NW Gulf early on Wednesday followed by strong to near gale force north to northeast winds. Frequent gusts to gale force are expected in the NW Gulf on Wednesday and early Wednesday night. This front will reach from northern Florida to near Tampico, Mexico by Wednesday night, and from central Florida to near Veracruz, Mexico early Thu. The front will reach the southeastern Gulf and Straits of Florida late Thursday and become stationary through late Friday while it weakens. Strong high pressure behind the front will shift eastward through Friday night allowing for winds to become easterly and moderate to fresh in speeds across most of the basin. Scattered showers and thunderstorms will precede the front.

...Discussion: Caribbean Sea
Scattered showers and isolated thunderstorms are in the southwestern Caribbean, more concentrated near and along the coast of Panama. Generally tranquil weather conditions prevail elsewhere. The pressure gradient between high pressure north of the Caribbean and lower pressure over northern South America is maintaining moderate to fresh trade winds in the central and eastern Caribbean, including the Windward Passage. Seas are across most of the Caribbean 4-7 ft. Seas up to 5 ft are noted within the Windward Passage. Gentle to moderate easterly breezes are in the northwestern Caribbean, except for mainly fresh E winds in the Gulf of Honduras and near the adjacent Bay Islands. Seas in the areas described are 2-4 ft.

For the forecast, Atlantic high pressure will maintain moderate to fresh trade winds across the central and eastern Caribbean Sea through Thursday afternoon. Winds will pulse to strong speeds overnight tonight and Wednesday night south of Hispaniola and in the Windward Passage. Beginning on Thursday evening, fresh to strong northeast winds will develop in the lee of Cuba, and in the Windward Passage, and continue south of Hispaniola. The fetch area will spread southwest over the western and central Caribbean sea through Saturday night as strengthening high pressure shifts offshore the mid-Atlantic region. Long-period north swell propagating through the Tropical N Atlantic waters will slowly subside through Wednesday night.

...Discussion: Atlantic Ocean
West of 55W, a weak cold front extends from 31N63W to 27N72W, then becomes a stationary front to the central Bahamas and to the Straits of Florida. Moderate to fresh N-NE winds are behind the boundary. Seas are generally 4 to 6 ft, with 3 ft seas near the Bahamas and Florida Peninsula. Scattered showers and a few thunderstorms moving east are seen within about 180 nm east of the front north of 26N. Elsewhere, 6 to 9 ft seas continue to reach the Leeward Islands, Virginia Islands, and Puerto Rico.

Farther east, a trough is analyzed from 31N40W to 25N44W and to 20N45W. A well-defined upper low is shown in water vapor imagery just east of the trough, supporting scattered moderate convection. The remainder of the tropical Atlantic remains under the dominance of an expansive subtropical ridge north of the area. Moderate trades are noted north of 20N and east of 40W near the ridge axis, where seas continue to be 11 to 13 ft. Moderate to fresh trades extend south of 20N, and south of 27N between the west coast of Africa and 40W. Seas of 10 to 15 ft are noted between 30W and 40W north of 20N, while seas of 9 to 14 ft are between 40W to 55W.

For the forecast, the aforementioned weak cold front will reach from 31N53W to 26N64W and become stationary to the central Bahamas Wednesday morning, then will dissipate by early Thursday as broad surface troughing forms east of the forecast waters. A strong cold front will move off the southeastern U.S. coast late Wednesday night, reach from near 31N67W to the NW Bahamas and to South Florida Thursday night, then become stationary near 25N by late Friday as strong high pressure builds across the area in its wake. Fresh to strong northeast to east winds and building seas to around 15 ft are expected north and northeast of the Bahamas Friday and Friday night. These seas are forecast to build even further Saturday and Saturday night in a long-period north to northeast swell, possibly reaching as high as 20 ft in the far northeast part of the forecast waters on Saturday night. The long-period swell will impact the waters between the southeastern Bahamas and Puerto Rico with rough seas thru Saturday night leading to potentially hazardous marine conditions.